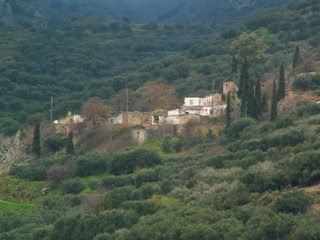 In distance of 16 kilometers from Sitia and 2 kilometers before Skordylo, in the bottom of Koprokefalas’ Mountain it is build the village of Riza. When the Ottomans invaded Crete the find this village and they wrote it under the name Rizu with 13 inhabitants. We must notice that it was a large village if we look all the other villages around which had no population more than ten people. The name of Riza, which means root, has taken from the reason of its constructions in the bottom of a mountain that’s mean in the roots of the mountain, even our days if you look the village from aware you will mention that the village has really built in the mountain roots.
Inventories

Riza was lived exclusively by Christians and we 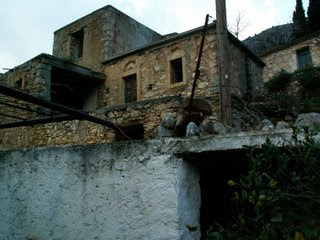 see this in all inventories. In the inventory of 1881 it is the village number 1021, it belongs in the municipality of Sitia with 10 families and 49 resident’s population. All Christians. In the inventory of Cretan state in 1900 Riza was number 1007 in the administrative jurisdiction of municipality of Sitia and it had 62 residents. In 1920’s inventory the increase of population was permanent and Riza was lived by only 73 residents, always Christian. In 1928 it increased its population in 75 individuals in order to 73 on 1940 once again. From 1971 the reduction of population is permanent. 69 individuals in 1951,.50 individuals in 1961,.33 in 1971, 19 in 1981, 11 in 1991 and hardly 6 in 2001 that are also the last year that is lived. From 2001 and afterwards the settlement devolved to the abandonment. Today only the light from the pillars of NATIONAL ELECTRICAL COMPANY has remained it reminds the previously small but dynamic settlement.

In the settlement we have a church that serves the needs of also cemetery. Even if in the same parish with the Skordylo the temple is dedicated is the Lord Transfiguration and from the window on the east part we can see a chronology year 1898. The church has been extended and this extension it should be became on 1912. It was never used as a single parish but as part of Skordilo parish.

During the Ottomans period the right to Christians in all over the empire to build churches was banned, even after the treaty of hutti-hummayum (1852) the right of building churches was not completely free, especially in the rural part because of conservative administrators or the normal incapability of everyday briefing. Under these circumstances the local ottomans authorities did not permit the right for a church. Even the source of water near by Muslim people from village Paraspori deny to Christians to take water from any local source, so the masons in order to cover necessary water took from the farmers the everyday milk from their animals and offer it to continue the construction of the church. That’s why the church took the name of Galatoktismeni means the church that constructed it by milk. Nowadays the small church has been transformed in a very important religious place and it is used as monastery during the period of the first 15 days of August and the celebrations of Virgin Mary all over the year.