Before the liberation from the Ottomans and some years before the final revolution in Crete, the Ottoman administration ordered for an inventory in the island of Crete. The needs that resulted afterwards the treaty of Halepa (Chania) and assessment on the public education it forced the general assembly and the head of the general administration Ioannis Fotiadi to order inventory under the responsibility of Nikolaos Stayrakakis, general secretary of administration in Crete. From the inventory 1881 we find that the Skordyllo, is municipal apartment of Municipality of Sitia and habited from 128 residents all of them Christians.
The inventory on 4th June 1900 with decree of Prince George of Greece, High Commissioner of Crete was realised with a view in order to realise the changes that was resulted in the total of population of the island and is normal that Crete afterwards the revolution and the independence with decreased population because of the slaughters from the period of revolution but also the retirement of Muslims element in regions with Ottoman sovereignty. Even if Skordyllo does not have Ottoman element in order to be consider logic a reduction of population because the slaughters of Muslim population that followed the outbreak of revolution. Thus at the inventory 1900 quoted as Skordyllo with 103 residents. All the residents they are Christians, no one of them Muslim. 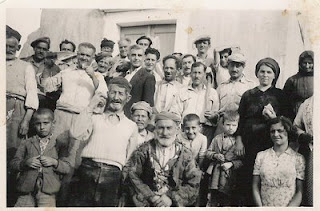 From 1900 they will follow twenty years in order to see newer inventory. The reasons are simple in the inventory 1907 Crete did not participate because the self-governing Cretan State thus does not have elements with regard to the demographic change. The union became in 1912 and the happenings martial makes but also political instability did not allow to becomes inventory despite 1920 and then Skordyllo is recorded with 111, reasonable small increase of population after a lot of young people were in army and they were found in the martial forehead of Minor Asia adventure.
The inventory 1928 shows a small increase and Skordyllo is lived by 120 residents. In 1940 the settlement has been increased in the 141 individuals who decrease spectacularly in 114 individuals in the inventory 1951. The next ten years and up to the inventory 1961 the settlement come back in the 141 individuals and shows a progress in the question of population. However they are the last days of glory after in the inventory 1971 the population has been decreased almost in half me is lived by 73 individuals, in 1981 falls in the 64 individuals, in 1991 in the 47 and in 2001 in 33.